Middle school is an uncomfortable time. Most of us are far removed from those days of catty lunchroom politics and overwhelming, freakish bodily mutations. But we still cringe when we remember how terrifyingly, unexplainably awkward we were.

It had been a while since I’d been to a bar or bat mitzvah, but from what I remembered they were pretty stuffy events. A few hours spent crammed into uncomfortable clothes, sweating out the boredom, followed by some sort of reception, which was similar to a middle school dance except there were a bunch of old people there and you were forced to attend out of religious propriety. My terrified, giggling buddies and I would stand around on the periphery cracking jokes while all the girls and a few brave boys occupied the dance floor. It must be said that I was not exactly one of the “cool kids,” but neither was I the most reclusive, and the number of kids on the dance floor always seemed fewer than the number who chose to sit out most of the songs.

I was totally surprised the first time I was sent out to work a bar mitzvah as one of Eureka’s On the Spot game leaders. It was a beautiful day, and we’d set up in a big ballroom with large French windows. The sun shone invitingly over the tables where we’d arranged games like Abalone, Quarto, and a giant chess mat. It wasn’t long before the guests started trickling in.

I’d been picturing the four of us in our green vests standing awkwardly over a table cluttered with puzzles in the corner of some dark room, watching the festivities and entertaining the odd passerby, an afterthought to the usual bat or bar mitzvah deejay and catering. But it quickly became apparent I was wrong. We were the main event, and the kids were loving it. The room filled with people so we game leaders had our hands full circulating the room and handing out stickers for the challenge course (more on that a little later), explaining rules, and partnering the kids up to play games together. 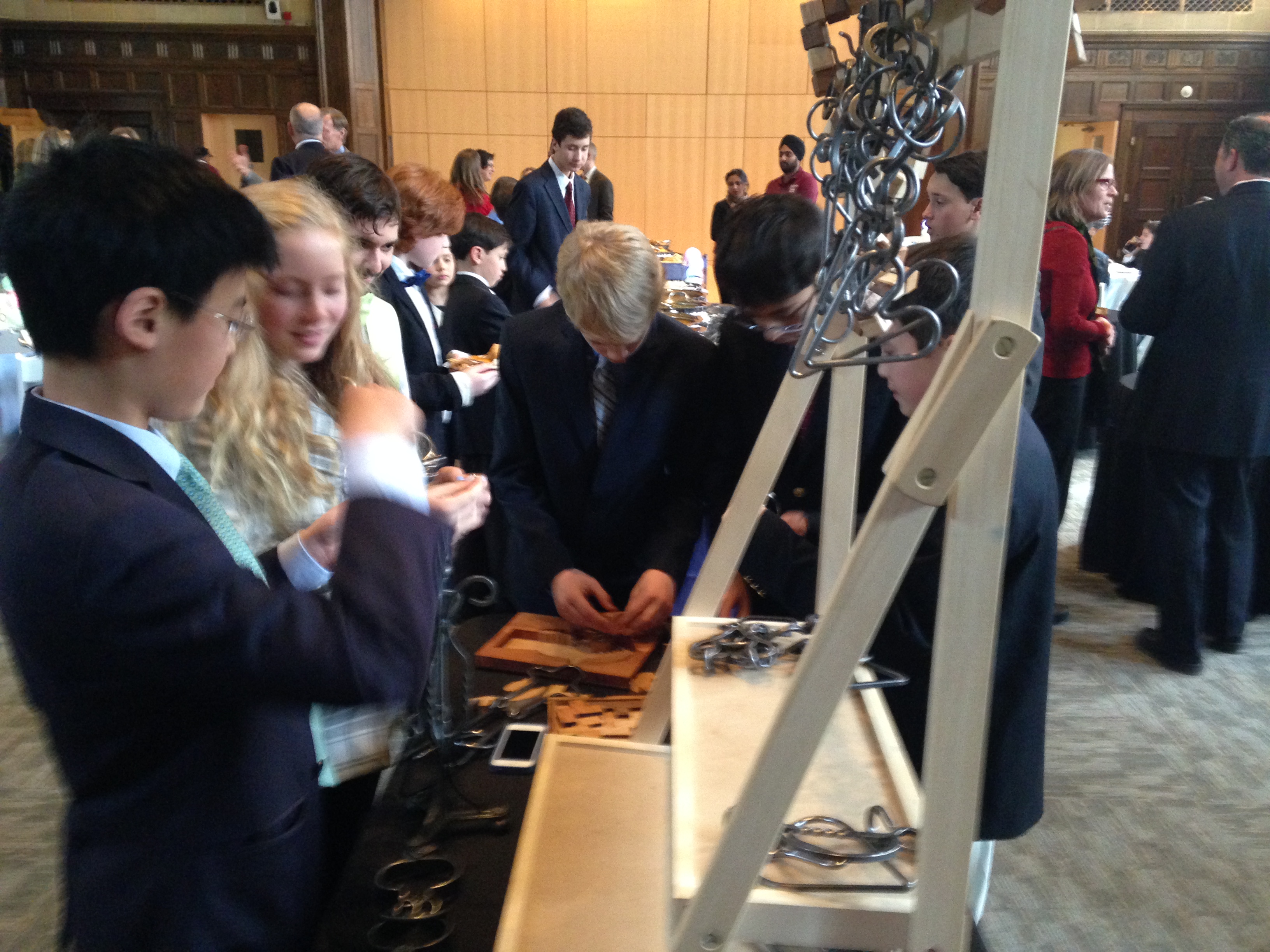 The comfortable, festive energy in the room surprised me. But I was even more stunned by the lack of social awkwardness. Girls and boys were getting along and talking to each other! Some of the kids knew the games already and pulled their friends along to teach them. Others asked us how the games worked, and we stood by for a round or two to make sure they got the hang of it. But it quickly became apparent that the games were a hit as the afternoon progressed; after we told one kid the rules, he or she would stick around for a couple of rounds and teach their next opponent. That opponent would teach the next kid, and so on. The kids became fairly self-sufficient, with the game leaders stepping in occasionally to offer advanced strategies or  clarify the rules. 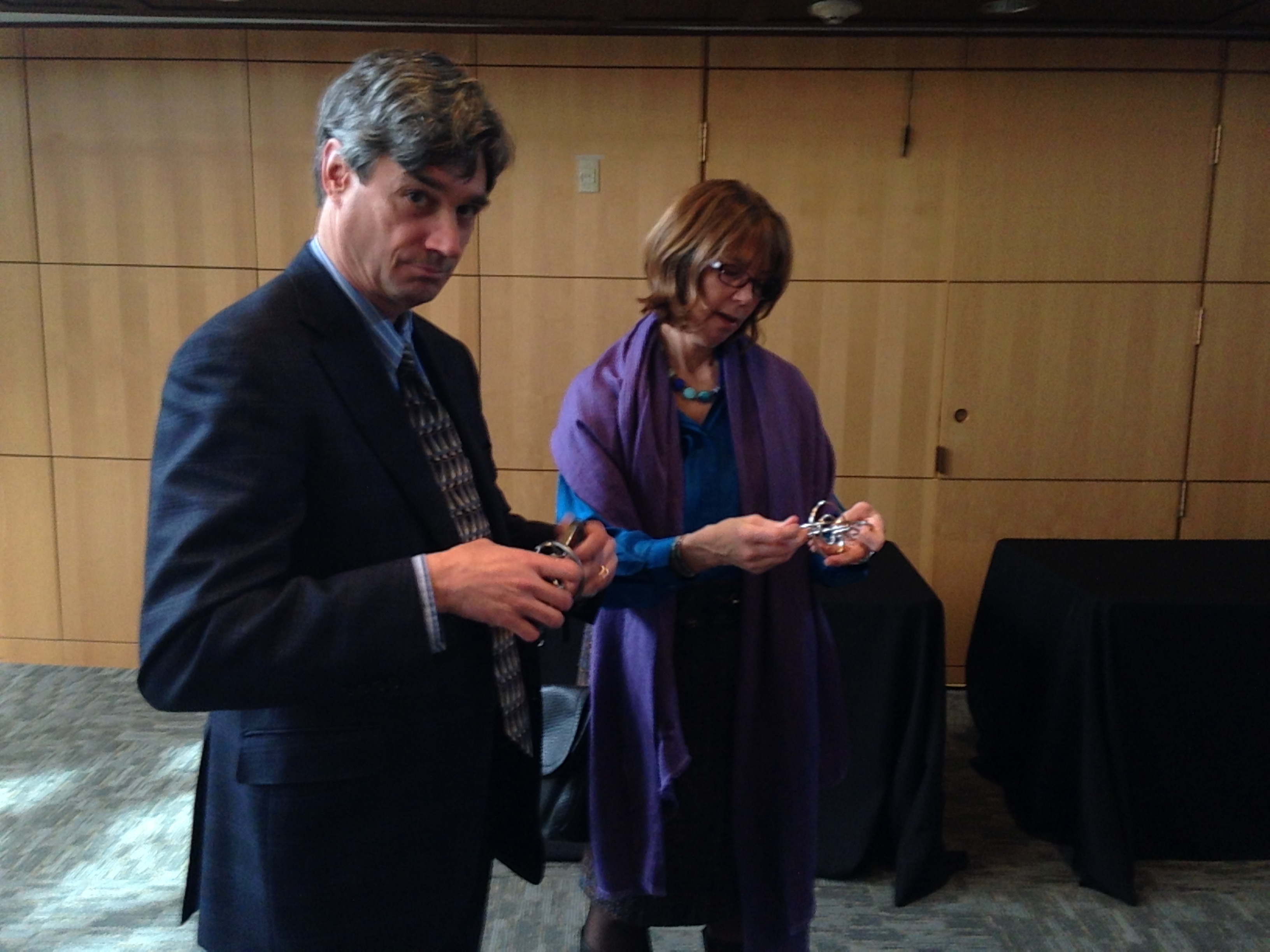 And the kids weren’t the only ones enjoying themselves. The adult population in the room began to stir. At first there were only a few parents, stepping in to check on the kids or just take a look around, but soon there was a large clump of adults congregated around the mechanical puzzle station. Most had a wine glass in one hand and a tavern puzzle or a packing puzzle in the other. Some were idly fiddling while chatting. Some were totally engrossed; they’d set the wine down and were fiendishly struggling to get their puzzle apart. After a while, they started lining up behind the kids, sheepishly asking if I could help them solve their puzzle.

By the end of the event I’d been asked multiple times about our business, “Do you do birthdays?” “What’s your rate for events?” Apparently, I wasn’t the only one who was impressed. At the end of the party, after all the guests had left and we had begun cleaning up, the hostess came up to us beaming. “I have a few older boys,” she said, “and if you can believe it, this is the first bar mitzvah where anyone’s come up to me and made a point to tell me they had a good time.”

“It turns out gameplay is appealing to people across gender and generation.”

“Our goal is to create an atmosphere,” says Rafi Benjamin, our On the Spot coordinator. “When we started this, no one really knew what a game event was, so we had to kind of make up our own definition. David (Eureka’s owner) wanted to answer the demand of kids who like to use their minds to have fun. Not all bar mitzvah kids enjoy the club scene. It turns out gameplay is appealing to people across gender and generation. It’s about creating an environment with few social barriers.” When you’re not out on the dance floor, there’s less of a risk of looking silly, Rafi explains. It’s a less nervous environment. “The Jewish Advocate described our events as haimish, which is a Yiddish word that means relaxed, or cozy. We like to make sure no one gets left out.”

To create that same atmosphere at every event, there are three core elements we always use:

I asked Eureka’s owner, David, what prompted him to start doing events in the first place. “We had been running community game nights, board game camps, and after school programs since the early days of the business,” he explained, “and I’d occasionally get a request for someone to come to a party, you know, replicate a game night for free and sell merchandise on the side. At first I was hesitant.”

But eventually one very persistent family convinced him to try it out. “They kept coming back and asking ‘have you thought about it?’ Eventually I said yes.”

For years after that, Eureka only went to events on special occasions as a favor to personal acquaintances. It was a two person operation, with David and Devon Trevelyan (who now owns Knight Moves Board Game Café) taking a few games and puzzles to the early events. “There were ten or fifteen events per year at most,” David says.

Rafi came on as a game leader in 2011. The business was gaining a reputation in the community and they’d started doing two parties a month. People were calling more frequently, requesting event services, and David was having a hard time organizing it all. He turned to Rafi Benjamin.

“I come from a circus background, and in the summer of 2012 I was actually leaving Boston to teach circus camp with Circus Smirkus for two months,” Rafi says. “David asked if, when I got back, I could take over events. David is the best idea guy I know. He’s great at the creative and social sides, but he lacks a bit in organization,” Rafi laughs. “I tried to take David’s brain child and organize it.” 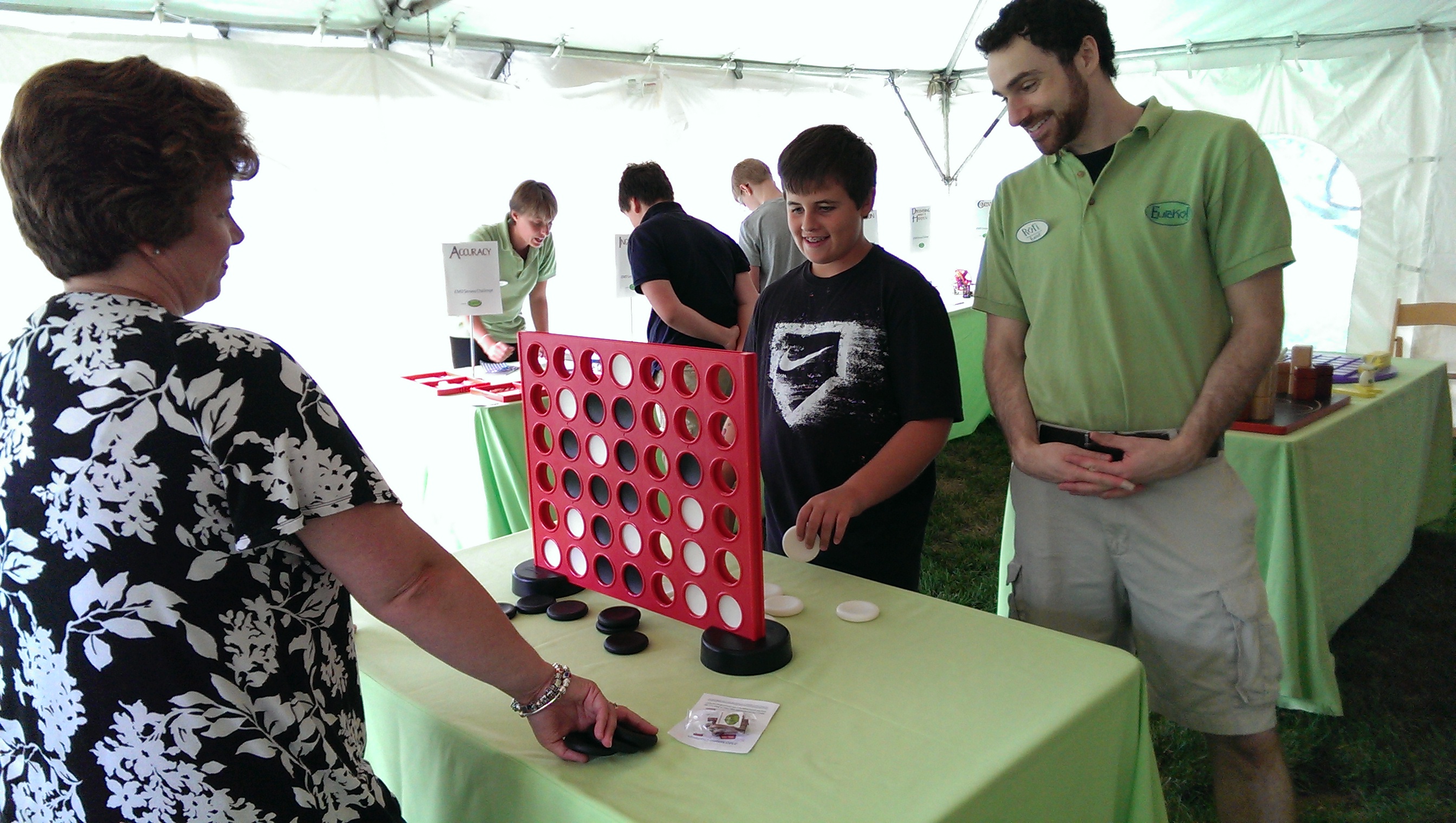 Under Rafi’s supervision, On the Spot services have expanded rapidly since 2012. While bar and bat mitzvahs are our specialty, we’ve provided entertainment for pretty much any function you can think of from 50th birthday parties to corporate retreats for the hotel accommodation industry. In addition to our three basic services, Rafi enjoys finding other activities to cater to the needs of the event.

After the three core services listed above, our events are fully customizable. “The possibilities are pretty much endless,” Rafi says proudly. “We’ve expanded greatly as an entertainment company. Now we do much more than puzzles and games.”

Rafi likes to work closely with the family to create a complete party environment. We own a full professional sound system, which we frequently bring to events to provide music that’s event-appropriate and enhances the atmosphere rather than distracting from it.

“One of the most popular services we provide is the challenge course,” Rafi says. “These are a series of challenges that we set up throughout the party that are targeted to engage the kids. So you’re running around solving puzzles and playing games and collecting stickers and at the end you get a prize.” They’re typically themed with the party. For bar and bat mitzvahs, for example, Rafi has challenge courses that relate to themes from Judaic studies. “The challenge course is internally competitive. The kids are competing against themselves. They’re goal-oriented and encourage all different kinds of thinking. You give a kid of a certain age a challenge or a goal and suddenly everything changes and they say ‘LET’S DO IT!’”

To satisfy the needs of adult guests, we’ll often bring table activities. These are small games and puzzles that can be brought to family events and reunions. “They encourage folks to sit around and schmooze for a few hours,” says Rafi.  “You’ll see people wandering from table to table, picking up puzzles and saying, ‘here check this out.’”

“Another offering is our workshops,” Rafi says. These are special activities held by a specialist within an event that teach a special skill or craft. “They started by us asking ‘what can we offer that’s physical, you know, that will get people off their feet. The first one was a juggling workshop that I put together. Since then we’ve done a few others such as tight rope walking and origami. We try to choose activities that require mental focus. Origami, for example, combines a craft and a puzzle and requires fine motor skills. So everyone leaves the workshop having learned something and had fun.”

Some Eureka staff members come from casino backgrounds, and from time to time we’ve brought blackjack and roulette to events. We’ve also provided custom jigsaws that all the guests work on to complete. At the end of the party the puzzle is mounted and everyone signs it.

“I’ve really branched out in my role as an event planner,” Rafi says. “I’ll coordinate the flow of the event as a whole, design floor plans, and emcee the event myself. Our goal is not to create one-big attention-demanding splash but guide the whole event in a relaxed way and keep the attention on those we’re celebrating.”

I ask him what his goals are for 2015. He tells me at the moment he’s working on a portable mini golf course that he can bring to events. We may set it up for a demo in the alley next to Eureka now that the weather’s getting warmer. Every event requires unique planning to allow for specific restraints and requests. Our abilities are constantly expanding as we take on new staff members.

Since I started working, it seems like we’re taking on more contracts than ever, and with bar mitzvah season approaching, Rafi will have his hands full. But he doesn’t seem worried. He’s excited by the prospect. It means word is getting out about On the Spot. And if his hands get too full, he’s pretty good at juggling. 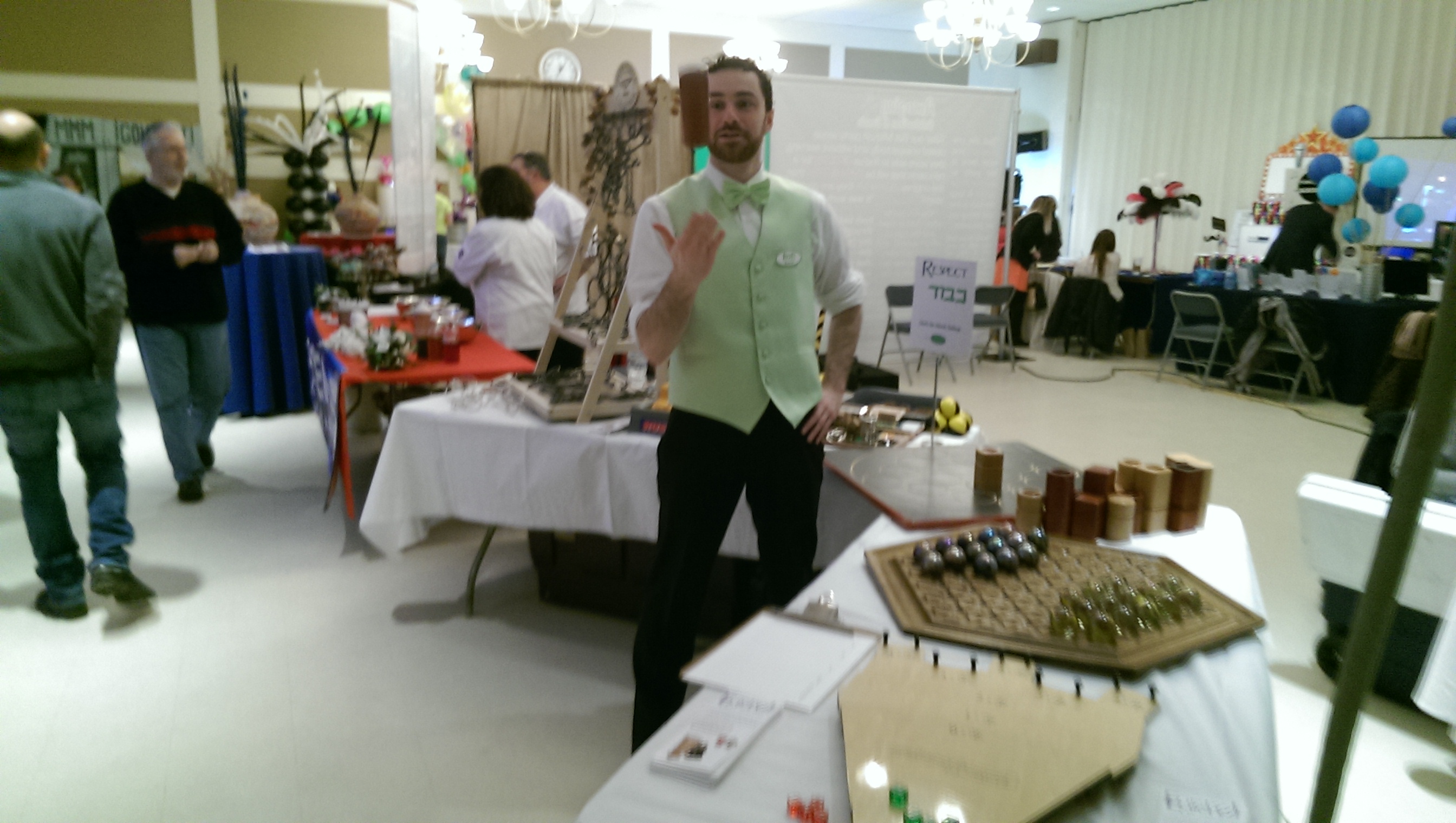 Jamie is a retail associate at Eureka! He's a published author and playwright whose work appears locally from time to time in the greater Boston area. He is also the facilitator of the local Coolidge Corner Merchants association. Find him sitting with a beer in the third row of the Coolidge Corner Theater or haunting the streets of Brookline with his new dog Paul.